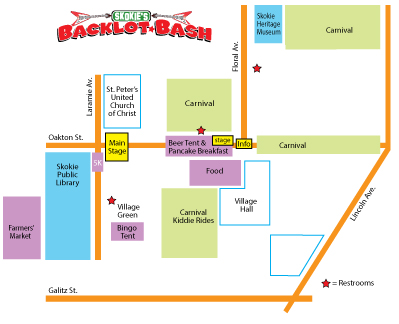 Bicycle Parking
Parking for bikes is available throughout the Backlot grounds including at the Library and the Village Hall.

Auto parking will be available within two blocks of the Bash during these hours in the following church and downtown Skokie public parking lots :

Getting to the Bash

The CTA #97 Skokie bus route is a good alternative to the Yellow Line. #97 Skokie info.

Driving directions from south: From the south and Chicago -Take I-94 (Edens Expressway) to the Touhy east exit. Turn left on Cicero/Skokie Blvd.. Proceed seven blocks north to Lincoln Ave. Turn left (northwest) on Lincoln, cross Howard and contiue on Lincoln Avenue to downtown Skokie.
From the east and Evanston -Take Oakton Street across Skokie Blvd. Ample parking is available in neighboring lots.

Biking Routes to the Bash

• A two-block portion of Oakton Street between Lincoln and Laramie Avenues, adjacent to the Village Hall.

• A one block section of Lincoln Avenue, between Oakton and Brown.

• A one block section of Floral Avenue, between Oakton and Brown.

Recommended detours:
For eastbound traffic – Traffic driving eastbound on Oakton Street will be diverted at Gross Point Road, north to Lincoln Avenue east, which becomes Main Street, then east to Skokie Boulevard, then south on Skokie Boulevard back to Oakton Street. Local residents will be able to access their neighborhood. The western end of the Oakton Street closure will physically begin at Park Avenue.