Having quickly earned a reputation for quality, original live music, as well as a host of unique family attractions — Skokie's downtown summer street festival is held annually over three days in late August, one week prior to Labor Day weekend. Since its inception in 2007, Skokie's Backlot Bash has presented international eclectic Rock, Blues and R&B artists, including The Psychedelic Furs, Presidents of the United States of America, Lonnie Brooks, Living Colour, The Fixx, The English Beat, War, The Romantics, Cracker, Fastball, The Smithereens, Marshall Crenshaw, Spin Doctors, Blue Oyster Cult and Smoking Popes.

In 2007, four local government agencies and two not-for-profit business organizations set out to bring attention to Skokie's growing downtown, by planning a late summer street festival. Determined to pitch an audacious plan to the powers-that-be, the group ultimately suggested that the Village close down three blocks of Oakton Street (a major east-west transportation artery) for three days, directly in front of the Village Hall, with rock bands, a carnival midway, and a beer tent. Astoundingly, Skokie leaders were all for the crazy plan, and Skokie's Backlot Bash is now known far-and-wide as one of the premier street festivals in Chicagoland. 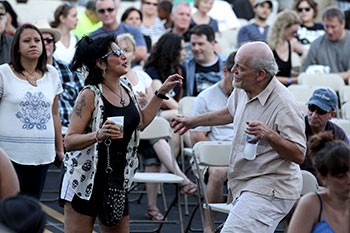 Click here for a detailed map of the Backlot Bash grounds!

If you or your group or business are interested in volunteering at the Backlot Bash, please contact Fouzia Khan at (847) 674-1500, ext. 3420. or fill out the online volunteer application.

More than a century ago, moving pictures exploded as a new source of American entertainment. From 1907 to 1917, Chicago's Essanay Film Manufacturing Company functioned as one of the country's pre-Hollywood titans of cinema, with stars such as the legendary Charlie Chaplin, "Bronco Billy" Anderson and Gloria Swanson working for the studio.

Because the Village of Skokie (then Niles Center) – with its wood frame buildings – resembled an old prairie town, the studio frequently used Skokie's downtown streets for shooting western movies. The historic 'Niles Center,' now the Skokie Theatre, was built in 1916 and often showed pictures that had been shot just steps from their doors. More than 100 years later, on the same streets that once staged movie gunfights and bank robberies, Skokie's Backlot Bash pays homage to downtown Skokie's heritage as a silent movie backlot set, by featuring modern day entertainment, as well as showing free classic or silent films.